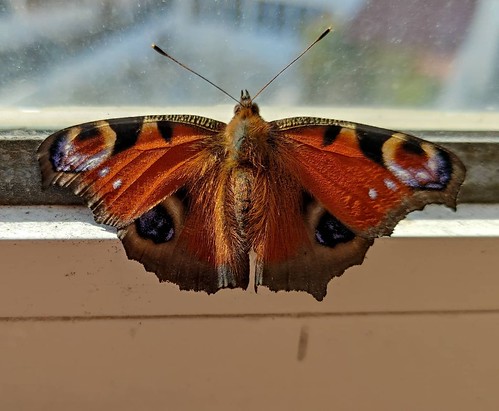 One January morning, I heard the sound of fluttering wings against a window, only to find no other than a European Peacock! An open window plus plenty of plants in the house made it attractive for this little bug.

True to its name it has a rusty red wingspan of 50 to 55 mm with eye spots on the side, these serve to help deter predators.

It can be most commonly found in European Gardens with males being extremely territorial, and hibernating over winter. Speaking of which, peacock couples are monogamous due to the female being only receptive over a short period of time after overwintering.

Often males will select areas that are attractive to the female which often includes a place where there is plenty of food sources, water holes, or good nesting sites.

Places where there are plenty of flowering plants, such as dandelions, clover, willows, etc... make for ideal feeding grounds for adult butterflies. As for caterpillars stinging nettle (Urtica dioica), hop (Humulus lupulus), and the small nettle (Urtica urens) are their foods of choice.

The better the location the more like it will attract a mate, and once they find such an area they will go out of their way to defend it and kick out and invading males.

But once they see a female they will chase after her performing nature´s own personal flying show.

However, due to its seasonal habits, males tend to have a shorter lifespan, once the mating ends the female will go on to hibernate and then lay her eggs in early spring. About 400, in fact! That´s a lot of caterpillars. Anything to increase their chances of surviving into adulthood.

And yes their predators are many often they have to deal with birds and yes rodents, who see them as just a nice snack.

This is where the eye spots in their wings come in.

Birds will often mistake them for the eyes of one of their own predators, and will even panic at the sight.

But they are not very effective against mice who live in dark spaces they share during winter and don´t depend on sight, so instead, it just produces a hissing sound.

So if you´re walking by a garden during spring and see a red butterfly with colorful spots, you might have just had an encounter with a European Peacock. 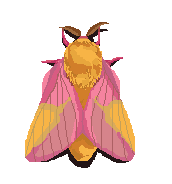